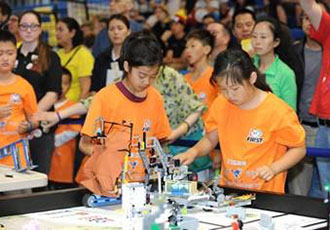 FIRST LEGO League, a global science and technology challenge, is now open to entry for teams of young people from across Cambridgeshire. This year’s theme is INTO ORBIT and teams of 9 to 16 year olds will be taken on an ‘out of this world’ experience as they explore space-themed engineering problems, and build and programme robots.

Finally, they will compete in the Cambridgeshire regional tournament, which will take place at the University of Cambridge’s Department of Engineering on Tuesday, 15th January 2019.

Designed to encourage young people to take an interest in real world issues and develop technology skills, the challenge comprises three parts: the Robot Game, the Project, and the Core Values. This year’s project assignment will challenge teams of up to ten children to identify a physical or social problem faced by humans during long duration space exploration within our sun’s solar system and are encouraged to come up with a solution to the problem using robotics.

During the Robot Game, teams will programme an autonomous robot, using a LEGO MINDSTORMS kit, to score points on a themed playing field. These robots will be put to the test during the regional tournament where teams will compete with them to solve a number of missions. Throughout the entire FIRST LEGO League challenge, teams will operate under, and be asked to demonstrate, the FIRST signature set of Core Values, celebrating discovery, innovation, impact, inclusion, teamwork and fun.

FIRST LEGO League, one of four programs offered by FIRST, is an annual international competition which sees over 250,000 young people (in 32,000 teams), from across 88 countries, come together to develop their STEM skills. Winners of the Cambridge regional tournament will be given the opportunity to progress to the UK and Ireland final in February, and then on to the World Festival in Detroit, Michigan, 24th to27th April.

The operational partner of the FIRST LEGO League in the UK and Ireland is The Institution of Engineering and Technology (IET), and the competition is also supported globally by Qualcomm Technologies, Inc. and its subsidiaries, with sponsorship that helps to fund participation. During the Cambridge tournament, Qualcomm Technologies International’s local team (based in Cambridge) lends its engineering expertise to mentor the teams of young people.

Mandy Workman, IET Education Manager, FIRST LEGO League, commented: “This year is the 30th season of the FIRST LEGO League and every year I am intrigued to see the innovative ideas and solutions that the young people come up with. I think this year’s space theme will really spark the participants’ imaginations and throw up some very interesting ideas. As well as giving young people the opportunity to work in teams to develop their problem solving, critical thinking and presentation skills, FIRST LEGO League aims to prepare participants for work in the 21st century workplace, engaging them with robotics and providing engineering experience.”

Seema Webb, director, human resources, Qualcomm Technologies International, oversees the company’s involvement in the Cambridge tournament. Webb added: “At Qualcomm Technologies International, we are firm believers in introducing young people to technology and engineering in an exciting way. Events like FIRST LEGO League are so important for engaging young people’s interest in STEM subjects, as well as helping them to develop the skills that are crucial for their future careers. We hope to inspire the next generation of colleagues during the tournament, and also can’t wait to see all of the LEGO robots in action!”

Registration for the FIRST LEGO League 2018-19 season is now open to teams of up to ten individuals, aged 9 to 16 years. Teams can be school groups, scout groups, or simply a team of friends, but will need at least two adult coaches. For more information on how to register, click here.