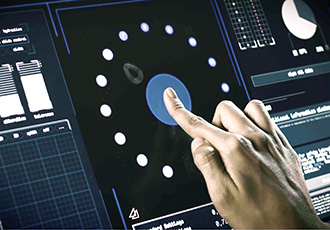 At the 2018 electronica exhibition in Munich, Germany, RAFI presented its latest command and control technology innovations. These include TWIN TOUCH touchscreen technology, new touchscreen control solutions from the FLEXSCAPE program, and the expanded line of RAMO pushbuttons.

In addition, RAFI showcased new emergency stop pushbuttons for use in handheld remote control units that clearly signal their active or inactive state. As stipulated by DIN EN ISO 13850, inactive buttons do not have the appearance of safety devices.

TWIN TOUCH is a touchscreen that not only detects capacitive touch inputs but also the pressure exerted on the panel. This new feature prevents false inputs through external forces; it increases operating reliability and allows the implementation of additional input levels. Pressure thresholds for input recognition can be set via software.

The new FLEXSCAPE input devices for integration in touchscreens also open up new possibilities: the FLEXSCAPE ONE pushbutton is activated by touch, but is only switched when a certain pressure threshold is exceeded. Tactile feedback to confirm switching enables safe no-look operation. A low-cost alternative to milled contours in the touchscreen, FLEXSCAPE WHEEL is a finger guide that comes as a sticker, which can simply be attached to the glass surface.

Only when the control device is actively connected, this pushbutton made of transparent colourless plastic is lit up by a red LED, as required by DIN EN ISO 13850. On inactive buttons, the light is off. Lacking the typical red colouring, the clear plastic mushroom cannot be easily mistaken for a functional E-Stop control.