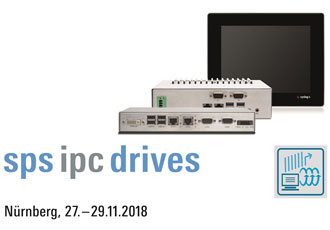 At the end of November, the SPS IPC Drives trade show will once again be held in Nuremberg. This event will feature Syslogic showcasing its portfolio of industrial PCs and touch panels as well as a new AI (Artificial Intelligence) computer in Hall 8, Stand 403.

Syslogic specialises in embedded systems for demanding applications. The company’s industrial PCs and touch panel computers are used in vehicles, in automation systems, in traffic engineering, and in heavy industry applications. At SPS IPC Drives in Nuremberg, Syslogic will present a selection from their large assortment.

Syslogic offers high quality industrial computers and HMI systems that can be adapted to customer requirements, even for small editions.

AI will revolutionise the industry
The new AI embedded computer by Syslogic use Nvidia’s Jetson TX2i modules. The Nvidia GPU features an economical but powerful quad-core processor platform. The core of the Jetson TX2 is the ARM SoC Tegra X2 named Parker. It combines two computation modules with Nvidia’s proprietary Denver 2 microarchitecture with four Cortex-A57 cores and a Pascal GPU.

The latter has 256 shader cores. The embedded computer supports CUDA applications and is suitable for AI sub areas such as machine vision, intelligent control and deep learning. Optional WiFi, GPS and LTE features make it easy to integrate the AI computer into applications using Industrial Internet of Things (IIoT).

Syslogic is currently making its AI hardware platform available as prototypes. The first few applications will soon be tackled with existing industrial customers. Florian Egger, Head of Sales at Syslogic, said: "We are convinced that with the AI embedded computers we will be able to contribute to the future of industrial automation."

He further stated that Syslogic is accordingly working hard on developing a deep learning solution in joint efforts with a software partner. Moreover, the Syslogic hardware engineers are already designing an AI box PC with the new Nvidia Xavier platform.

Flash memory that can keep up
In addition to the AI computer and the embedded systems, Syslogic will also present flash memory products of Taiwanese manufacturer, Cactus Technologies at SPS IPC Drives. Syslogic not only uses NAND flash memory, developed exclusively for industrial use, in its own devices, but also sells them in German-speaking countries as an official distributor. Memory cards by Cactus are suitable for challenging industrial applications.