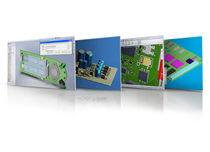 Altium has today announced that it is partnered with Desktop EDA to provide designers with advanced ECAD and MCAD integration. The new add-on application, Desktop EDA Solidworks Modeler and the IDF Modelers, is currently available for Altium Designer.

The extension apps for Altium Designer and their companion plug-ins form a bridge between the ECAD and MCAD design worlds. Productivity is greatly increased through the full synchronization capabilities between the target applications. This goes much further than simply eliminating the requirement to recreate MCAD assemblies each time, allowing the modeling of Altium Designer-specific features in the target MCAD system.

By transferring data directly between Altium Designer and SolidWorks programs running on the same PC, designers need not use intermediate files to synchronize design changes and facilitate engineering change orders. This approach eliminates translation issues, saves time and provides a more detailed model of the PCB design in SolidWorks.

By including PCB copper layers in the transfer, the design in SolidWorks can then be used as a starting point for more advanced mechanical CAD operations, such as thermal simulation.

Desktop EDA’s advanced IDF modeler app for Altium Designer allows users of the native 3D PCB design system to export and import a rich, complete model of the 3D PCB in the industry standard IDF file format. Coupled with a companion Desktop EDA plug-in for the target MCAD design tool, teams save time by having both full synchronization features as well as PCB copper design elements.