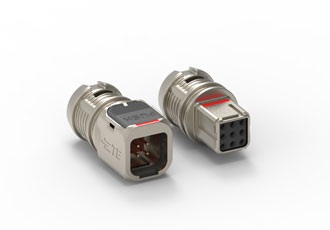 TE Connectivity is extending its time-tested 369 connector series with the introduction of the new 369 shielded rectangular connectors for environments that demand ambient EMI noise protection. These connectors incorporate the benefits of the 369 series, which is qualified for use in a wide range of commercial aerospace applications, with EMI shielding that opens up new application possibilities.

“The combination of shielding technology with the existing 369 connector series enables a huge range of potential applications for the 369 series beyond commercial aerospace,” said Clint Schlosser, Product Manager for TE’s Aerospace, Defense and Marine division.

TE’s new rectangular connectors have been tested to withstand indirect lightning strikes of 3.6kA and are rated to provide effective shielding of greater than 60DB at low frequencies and greater than 40DB at high frequencies.

This EMI protection technology is wrapped in a lightweight, non-toxic (RoHS-compliant) composite nickel shell that can lead to up to 75% weight savings. 369 series shielded connectors enable data transfer rates of up to 100Mbs (100 Base-T1) and are backward compatible with current 369 product offerings.