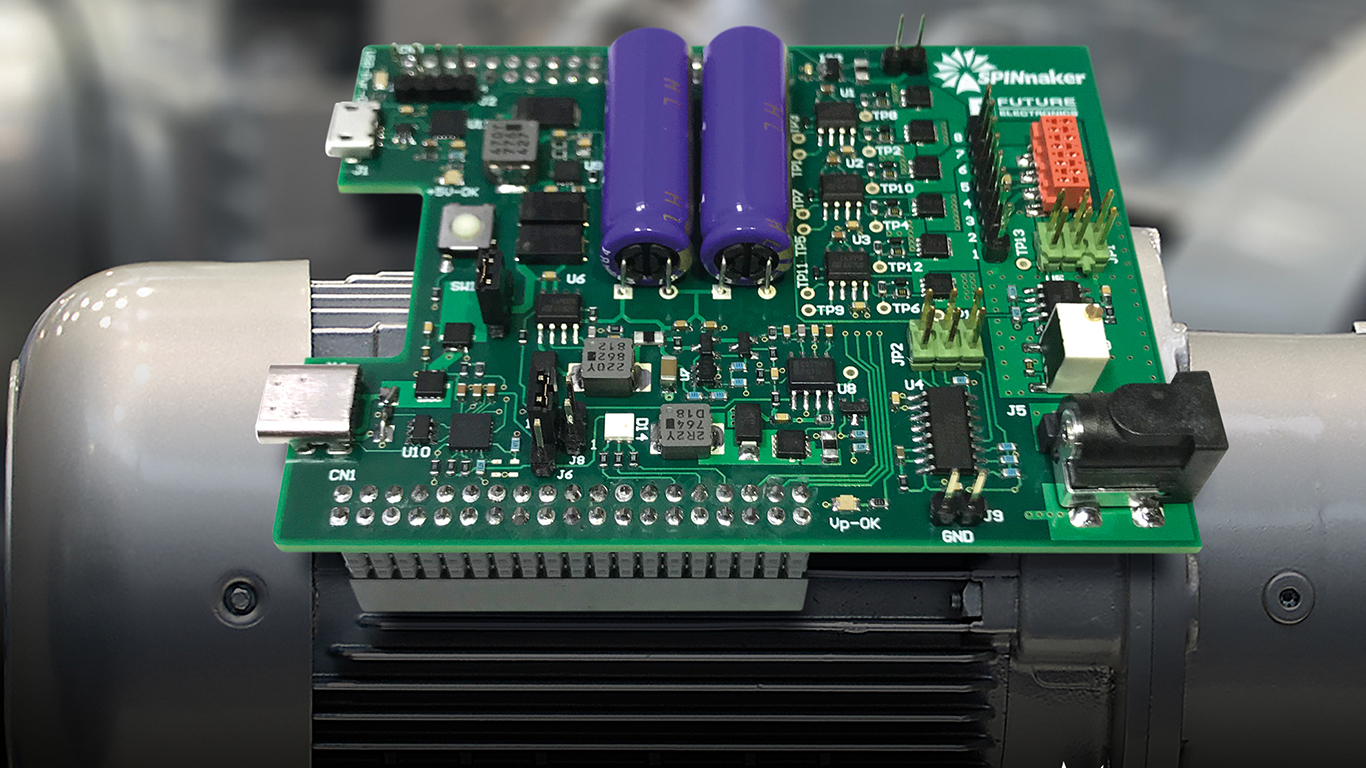 SPINnaker is a motor control daughter board from Future Electronics for low cost SPACE-Vector-Modulation build for the STMicroelectronics Nucleo-8S208RB kit, a development platform for the STM8S series of low-cost 8-bit microcontrollers board. It is being debuted and demonstrated at embedded world 2019 in Nuremberg (February 26-28).

“The SPINnaker daughterboard is the ideal rapid prototyping platform for motor control applications based on the use of an 8-bit MCU, which means it is half the cost of similar systems,” says Uwe Knipper, Technical Solutions Manager at Future Electronics.

Applications in the automotive, industrial, consumer and home automation sectors can all take advantage of the ready-made capabilities of the SPINnaker board and its software. The final solution is rated for operation at temperatures up to 150°C.

The SPINnaker board implements the space vector modulation (SVM) method of motor control, a technique which is usually not suited to 8-bit MCUs.

Fortunately for Future in Uwe Knipper it has someone who solved the problem by developing a unique algorithm for speed control and flux reduction. This is embedded in the motor control software which runs on the STM8S MCU occupying a small Flash memory footprint of less than 8kbytes and requiring less than 1.5kbytes of RAM. The algorithm controls motor position at a resolution of 384 steps per revolution.

Compared to block commutation, SVM offers valuable advantages including low acoustic noise and no torque ripple. These advantages are usually available for a higher system cost.

The SPINnaker design implements a low-cost, three-phase power stage composed of six 60V STL20N6F7 MOSFETs from STMicroelectronics. SPINnaker itself runs with up to 24V.

It also includes a USB Type-C power supply controlled by an STMicroelectronics STUSB4500, and a Panasonic supercapacitor-based back-up power supply to provide for safe shut-down in the case of an unexpected power failure.

In addition, the SPINnaker board’s Panasonic POSCAP polymer capacitors demonstrate the superior characteristics of this device type in an application that would traditionally use multi-layer ceramic capacitors.

The board’s metal composite inductors, from the Panasonic ETPQ series and the IHLP series from Vishay, have a small board footprint and offer excellent DC current saturation and temperature stability characteristics.

Etienne Lanoy, Director of the Future Electronics Centres of Excellence, said: ‘There are numerous motor-control development boards available for designers working in a 32-bit MCU environment, but precise motor-control schemes implemented on an 8-bit MCU have been much harder to find. Future Electronics’ development of the SPINnaker board now puts this right, providing a ready-made implementation of space vector modulation on the popular STM8S series of MCUs.’

The SPINnaker development board will be available at the in Q2 2019 free of charge to qualified customers of Future Electronics. The board is supplied with hardware and software design files and a PC GUI.