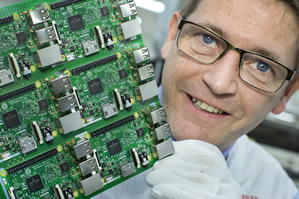 Boasting a 64-bit processor as well as built-in WiFi and Bluetooth connections, the Raspberry Pi 3 Model B has been launched by the two global distributors, element14 and RS Components. With the extra power and features Raspberry Pi will push further into industrial, IoT and domestic applications while retaining its attraction for school and college students.

This latest incarnation of the credit card sized computer adds more oomph in the shape of the 64-bit ARM Cortex-A53 quad-core processor running at 1.2GHz to deliver significantly enhanced performance.

The board is based on the Broadcom BCM2837 SoC, which includes the ARM processor alongside a BCM43438 combo connectivity device, which provides 802.11b/g/n wireless LAN, Bluetooth Classic and Bluetooth Low Energy.

The Raspberry Pi 3 boots from a micro SD card and uses the NOOBS (New Out Of the Box Software) installation manager.

element14 also announced a new Raspberry Pi case and a 2.5A Raspberry Pi power supply which will enable users to power their Pi and ‘add-on’ boards all from one power source – maximising the benefits of the Pi 3’s improved power management capabilities.

It is also offering support for users’ project through a dedicated Raspberry Pi design team.

This new arrival comes four years to the day the first Raspberry Pi computer was unveiled, and as it was launched in a Leap Year this can only happen once every four years.

Eben Upton praised the contribution of element 14 and RS Components in building the success of Raspberry Pi.

“Both have played a significant role in its success as leading and trusted sources of products, technologies and information for professional engineers, hobbyists and those looking to make their first steps into the work of programming," he commented.

Claire Doyle, Global Head of Raspberry Pi at element14 was in ebullient mood: “Today, as we celebrate the 4th birthday of Raspberry Pi, we reach another major milestone on the Pi journey with the launch of an even faster, technically advanced board for an amazing price of USD35. The new Raspberry Pi 3 Model B offers a higher level of performance than any other Raspberry Pi board on the market.

“We are very excited, as the leading manufacturer and distributor of the Raspberry Pi, to launch this product and to get it into the hands of customers worldwide. Supported by our growing accessory portfolio, the new Raspberry Pi 3 allows customers to develop specific applications and build new projects - and we can’t wait to see what customers will do with it!”

"Raspberry Pi has taken another important step in its evolution," said Lindsley Ruth, Chief Executive Officer at Electrocomponents. "Based on the robust and well proven combination of hardware and software of the Raspberry Pi platform, this latest generation board delivers even more processing power together with embedded wireless connectivity, plus software to make it easy for businesses or individuals to develop applications for the Internet of Things. RS and Allied are honoured to once again embark upon another new chapter as a distribution partner for the Raspberry Pi Foundation."

To date eight million Raspberry Pis have been sold worldwide.