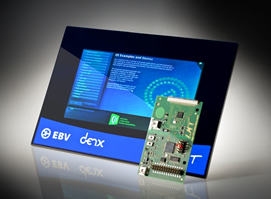 EBV Elektronikand LNT Automation have joined forces to develop and launch their Display/Touch Evaluation Kit. The kit comprises a 7in. touch display (EVK2TI1) from LNT together with the SoCrates board from EBV. This combination enables users to build a graphical user interface with a capacitive input system quickly and easily and to test it themselves.

The LNT EVK2TI1 consists of a 10-finger multi-touch sensor with a 7in. diagonal and ultra-thin conductive trace routing for a particularly narrow edge. It is bonded onto 3mm strong glass and connected to the touch interface 1 controller board with the Atmel mxT768E, which is provided with the kit. The pre-installed firmware enables embedded implementation in I²C, SPI, RS-232 and host development computers running Linux and Windows with USB HID.

All interfaces are documented on a USB thumb drive that comes with the kit. The display is an 800x480 TFT that is connected directly to the SoC FPGA via LVDS.

The SoCrates board includes a Cyclone V SoC (5CSEBA6U23C7N), providing logic density of 110K, 112 DSP blocks and 5.4 MB RAM. Socrates also offers multiple interfaces such as a UART-to-USB converter, the TFT-LVDS interface, a CMOS sensor interface as well as A/D and D/A converters. The USB-Blaster is also implemented on the board to facilitate the configuration and debugging of the Cyclone V SoC.

“Capacitive input systems are often very sensitive to environmental conditions such as temperature, humidity, metallic edges, pressure and electromagnetic interference from displays or other electronic systems,” notes Harald Friedrich, Vertical Segment Director FPGA at EBV Elektronik. “With the touch interface 1, EBV and LNT are providing customers with an attractive solution that helps them evaluate a capacitive input system relatively quickly and easily.”

Hendrik Bergau, Product Manager at LNT Automation, adds: “The touch interface 1 leverages the performance of Atmel’s maxTouch family and provides industrial and other users with power that has been limited to the tablet and smartphone markets up to now. This performance enables users to quickly implement the latest generation of multitouch functionality in any controller – from an IPC to an 8-bit embedded controller. With the structure we have implemented on the touch sensor, we are even able to virtually eliminate the environmental interferences that Harald Friedrich mentioned. With conventional touch sensors, these issues are extremely costly to resolve with software. LNT also provides customers with full support and coordination of the electronics in their project – right though to successful implementation. A simpler version of the evaluation tool kit without the display is also available to customers.”