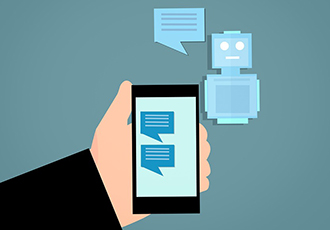 From devices in our homes, such as Google Home and Amazon Echo, to mobile apps like Cortana, AI has already made its way into our daily lives. The workplace is no exception and AI has already helped businesses make better use of data and streamline processes. While AI can make our lives easier, John Williams, Head of Marketing at Instant Offices predicts we are bound to encounter it more in the future, and it may impact jobs.

The future of chat bots
Facebook founder Mark Zuckerberg fuelled a lot of hype around chat bots replacing human jobs after it was announced Facebook Messenger would be hosting a number of them in the coming years. The aim is to help businesses build bots on the chat app so they can hold automated chats with people which will eventually lead to more sales, bookings and brand awareness.

In fact, there is currently an array of Bots already in use on the platform for various aspects of people’s lives. Some examples of brands using bots include:

The effect on business
Bots are essentially cheaper and quicker to make than apps, with many experts saying that bots will take over from apps in the near future. Many of these bots are able to carry out tasks traditionally done by humans including; customer service agents, fast-food servers, personal assistants, and social media managers

Jobs most likely to be replaced by AI
Along with bots carrying out day to day tasks, research shows that certain jobs are steadily becoming more at risk from being taken over by AI. Initiatives show what the approximate chances are that certain jobs will one day be automated, although these results vary, some of the jobs with the highest probability of automation include:

John Williams, Head of Marketing at The Instant Group, commented: “While AI will definitely take over a few human jobs, it will also create jobs. The role of computer scientists will be high in demand while new roles will be created to run the AI, including engineers, accountants and retail analysts. People will also be needed to prepare the data for the AI to process and t train employees on how to use this new technology.

“The presence of AI will grow in the workplace, and while creature, and while creating new jobs organisations need to realise that the real challenge will be finding candidates to take over these new roles.”