UK/Ireland distribution growth rolls on into 2019 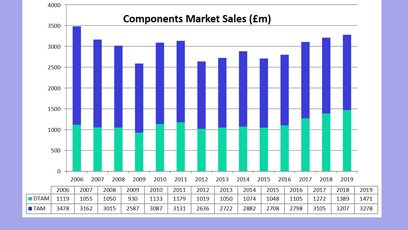 Disregarding a potential buffeting from Brexit and tariff wars, industry association ecsn/AFDEC is forecasting the UK and Ireland distribution market will grow 5.9% to £1.47bn in 2019, representing 44% of the Components Total Available Market (TAM) of £3.28bn.

While lower than this year’s likely 9.2% upswing, if achieved UK/Ireland distributors will have chalked up an unprecedented 15 consecutive quarters of growth, “a performance unseen since we started collecting the data way back in 1984”, observed Aubrey Dunford, ecsn analyst.

The 2019 quarterly breakdown predicts a healthy Q1, a potential softening in Q2 caused by overstocking and product availability before a pick-up in Q3 and Q4.

The word from ecsn/AFDEC members suggests they expect the diversity of applications using electronics highlighting upcoming opportunities provided by manufacturers looking to participate in the roll-out of 5G, autonomous vehicles, and smart cities.

“Share of market will be driven more by product availability in 2019 than strategic planning, says Dunford, and so we expect the Distributor Total Available Market (DTAM) share to grow.”

Design activity looks set to remain strong though a cautious eye will need to be kept on legislative issues including REACH, RoHS, the Radio Emissions Directive and Conflict Minerals as the Brexit saga plays out.

Dunford confirms that the market grew strongly throughout 2018 and should show a growth of about 9% over 2017 compared to the forecast, which predicted a growth range of 6.5% to 10.5%:

"Every quarter of this year saw sales growth when compared to the same quarter in 2017”; said Dunford. “Growth was not quite as strong as had been expected in the first half of the year but has continued to show stronger than predicted growth in the second half”. The ‘Book to Bill’ ratio remained above unity throughout the first half of 2018 but has softened somewhat in recent months: “The level of billings remained high in the second half, so we must expect that the growth rate will slow a little as we enter 2019, but our members are forecasting a further four quarters of growth at least”.

Commenting on the 2019 Forecast ecsn / afdec chairman Adam Fletcher welcomed the continued growth in the global economy and the likely consistent growth in the global electronic components market, which he believes will surge as 5G is rolled out: “The trajectory for the electronic components markets continues to be up and to the right and underlying growth has become the new normal but growth will probably not be linear and we must anticipate the odd bump along the way”, Fletcher said. “I’ve been predicting that the growth curve will adopt a hockey-stick shape towards the end of 2019 and into 2020, causing further supply network problems as components manufacturers scramble to keep up with the increased demand”.

He believes that growth in the UK, Europe and US will lag behind China and Asia-Pac economies who will be the primary beneficiaries of the 5G roll out and the increased demand for handsets: “I’m confident that UK electronic components markets will continue to grow over the next few years but at a rate lower than the global average rather than at the top of the growth. That said, I fear that we may to be negatively impacted by long lead-times and shortages of some components.” Fletcher added.