The time to go digital is now

Home > Around the Industry > The time to go digital is now
31st May 2018
Source: Novotek
Posted By : Joe Bush 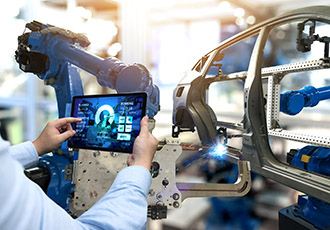 Plans to integrate digitalisation across the globe have led many governments to set-out initiatives to accelerate the rate of adoption over the next ten to 20 years. Here, George Walker, Managing Director of industrial IT and automation provider Novotek, explains why businesses should be looking to digitalise their systems sooner rather than later.

Harry Truman once said, “Progress occurs when courageous, skilful leaders seize the opportunity to change things for the better.” For many businesses, there is seldom an opportunity like the one being presented by digital technology and connectivity.

The potential value in making systems smarter and networks stronger has not only attracted the attention of business leaders around the world, it’s also captured the interest of governments. Countries like Germany, Sweden and the UK are all trying to bolster their economies with digital transformation, such as Produktion 2030.

In addition to investing into the next generation of technologies, the UK Government has outlined plans in its digital strategy to make sure adults who lack core digital skills will have free access to basic training. The model mirrors the approach taken with adult literacy and numeracy training and will help to improve employment prospects.

While initiatives like Produktion 2030 set out long-term plans to optimise the manufacturing industry, businesses need not wait and should not be afraid to embrace the internet of things (IoT) now.

The IoT movement is growing at a significant pace and impacting virtually every industry sector. It’s predicted that the number of IoT devices used across the world, will increase 12% on average per year, meaning there will be around 125 billion IoT devices in 2030.

Despite this, research has shown that many business executives want to follow the trend, rather than be seen as a leader in the journey to the industrial internet. As history shows, faster adoption of modern technologies not only gives the advantage of seizing more market share, but also the chance to create new potential markets. By not embracing the IIoT, businesses run the risk of being left behind, so why wait?

One of the main reasons for businesses delaying digital transformation is due to concerns about lacking the experience in-house to employ the required technologies. It is because of this that GE created its cloud-based platform, Predix. Predix is a platform as a service (PaaS) that can collate industrial-scale analytics for asset performance management and operations optimisation.

As a company that also builds heavy machinery, GE understands the needs of manufacturers and has tailored its software to be specifically industrial focussed. Offering users tools like asset connectivity and industrial-grade security, Predix enables manufacturers to easily connect areas of the business that would traditionally have been siloed. This includes everything from the engineering, manufacturing, supply chain and service areas of a business.

Novotek has experience in working with businesses looking to move away from siloed operations and introducing ways of working cross-company, by integrating systems like Predix. Delivering solutions to a vast range of sectors such as food production and chemical processing, to utilities and energy.

While initiatives like Produktion 2030 are intended to drive businesses towards a more efficient way of working, the advisory timescale should not put Swedish businesses off trying to digitalise their systems now. The sooner a company’s system is digitalised, the greater chance of them retaining a competitive edge in the industrial market