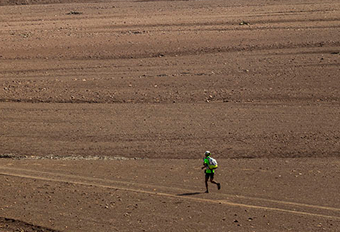 A specially designed app from IBM is helping a blind ultra-marathon runner to achieve his dream of competing in endurance races on his own. Simon Wheatcroft was born with the genetic degenerative eye condition, retinitis pigmentosa (RP), which causes gradual deterioration of the retina and in Wheatcroft’s case, resulted in him losing his sight when he was 17.

He originally took up running as a way of pushing his boundaries. He began by running between the goalposts at a local park – using the Runkeeper app to provide feedback on distance and pace. This then progressed to running on closed-off roads - using the feel of the double yellow lines and pavement camber to stay on track.

Once hooked on running, Wheatcroft started entering 10km events and has since participated in several endurance races including a 102 mile run in the Cotswolds and a 221 mile run from Boston to New York.

However, these events usually included running with a sighted human guide, and Wheatcroft wanted to enter as a solo competitor. This is where IBM Bluemix came in. The tech firm’s development arm created an app specifically designed for blind runners (called eAscot, after Wheatcroft's guide dog), that uses sensors and satellite navigation to help him stay on course. The app has stored GPS files with the coordinates of the race paths. As soon as Wheatcroft presses the start button on the one page interface, the app chooses the stored path which is closest to his current location. Wheatcroft wears an external and more accurate GPS device on his backpack, which is connected to his iPhone via Bluetooth.

The app uses a combination of a low pitched beep (too far left) or a high pitched beep (too far right) to keep Wheatcroft on track – with silence indicating a correct course. This feature was key, as audio cues (on apps such as Runkeeper), can be distracting for blind runners who rely heavily on ambient noise. Obstacles like trees and lampposts can also be tagged on the map. In addition, regular GPS is accurate to approximately 10-20m, which is fine for sighted people but is a major issue if you are blind. IBM’s new app, however, has been able to reduce this to around five metres.

Wheatcroft is working closely with IBM on the development of the app, including the future plan to incorporate motion sensor technology in order to avoid moving objects – such as other pedestrians.

Wheatcroft trialled the app when he participated in his first solo run - a 155 mile ultra-endurance race in the Namibian Sahara. The app mapped out the course as a series of straight lines and, despite an early exit from the event (due to the ground becoming far too rocky), and a one-in-a-million collision with a flagpole, Wheatcroft declared the trial was a success.

Failure to complete the event has certainly not put Wheatcroft off and he is currently planning his first solo city marathon.