Taking the fight to the ‘SAS’… Sexting and selfies

Home > Around the Industry > Taking the fight to the ‘SAS’… Sexting and selfies
24th May 2017
Source: Yipo Technologies
Posted By : Joe Bush 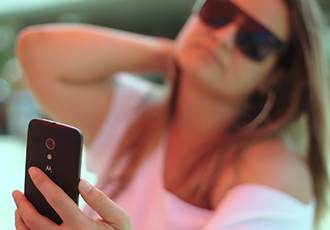 Being a parent in 2017 is not easy. As well as facing all the regular trials and tribulations of bringing up children, today’s parents have an extra issue that previous generations simply didn’t have to deal with – that of maintaining control over social media and internet use.

Our internet-driven and increasingly connected world has opened up a whole new level of possibilities for our children, enabling them to interact with one another in ever-changing ways and, for parents, innovations such as FaceTime and Find My Friends has added extra reassurance of always being able to contact their sons and daughters (who are rarely far from their smartphones). However, the meteoric rise in popularity of a variety of social media channels has also spawned its own raft of issues and concerns.

One of the most alarming of these, due to its sometimes tragic consequences, is of course cyber bullying. Website www.dosomething.org estimate that nearly 43% of children have experienced some form of online bullying, and one in four have had it occur more than once. Also worryingly, it is thought that only around one in ten victims of cyber bullying will inform their parents or a trusted adult.

Another growing problem is the type of information that young people (particularly young girls), share on social media and with friends. Advances in smartphone camera technology, the phenomenon of ‘the selfie’ and more social media avenues to explore, such as Instagram and Snapchat, have made it difficult for parents to keep tabs on exactly what their children are sharing online.

The NSPCC last year revealed an alarming rise in the number of young people involved in the possession of indecent images. Across the UK the number of crimes recorded for the possession, distribution and production of indecent images involving children (under 18) rose from 4,530 in 2013 to 10,818 in 2015. Indeed, The Independent has stated that the level of ‘sexting’ in Britain’s schools has reached epidemic proportions, and in some cases involve children as young as 12.

However, help may now be at parents’ fingertips after a company has developed an app that can help parents regain control over the social media activities of their children. The app, developed by Yipo Technology, can detect when children take or receive explicit images. The Galaxy Guardian app analyses images to spot nudity and alerts parents if a child saves explicit images to their phone. The company claims the app has a 96% success rate.

Speaking to the BBC, app creator Daniel Skowronski commented: “Quite simply, the app will first identify if there is a human in the picture. Once it’s established that, it will look at the skin, and the more skin there is, the more the algorithm advances to the point where it will eventually deem the image to be ‘suspicious’”. Gallery Guardian will then notify the parent that a suspicious image has been detected (the parent’s device is paired with the child’s when the app is downloaded), and will inform them how the image in question got onto the child’s device.

The BBC tested the subscription service with a variety of images and discovered that the app did fail to detect a fully exposed mirror selfie which had part of the body exposed.

Skowronski added: “We attack it [the image] mostly on the skin at first. We are trying to have it recognise genitalia as well. The algorithm is hard to train sometimes because of the different varieties in shapes and sizes [of body parts], but it gets better every day, it’s learning constantly and it’s doing a very good job when a lot of skin is exposed.”

One false positive discovered by the BBC as part of its test was a picture of children on the beach. While this is understandable, instances such as this do have the potential to irritate parents, to which Skowronski commented: “I would be more than happy as a parent knowing that I got a detection and I saw this [a picture of the children on the beach], rather than seeing the alternative. Clearly the alternative is being detected as well.”

Disappearing photo apps, such as Snapchat, are now incredibly popular with young people, but at present the app is unable to monitor disappearing images which, although potentially problematic, Skowronski added: “Right now with things like Snapchat it’s difficult to be able to catch that image, but how we can achieve it is, once a child does share an image over that medium, and another child takes a screenshot of it (which is really the way young people share Snapchat images amongst their friends), we have them.”