Now you can detect a disease with a smartphone

Home > Around the Industry > Now you can detect a disease with a smartphone
18th January 2018
Source: Morgan Innovation & Technology Ltd
Posted By : Anna Flockett 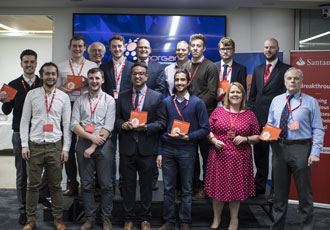 Imagine being able to detect a disease using a smartphone? Well now you can, as a life-changing invention can do exactly that, and has won a new £30,000 innovation competition. The inaugural Morgan Innovation & Technology (MIAT) Prize has been awarded to iVisco, invented by Dr Arslan Khalid of Scottish start-up Mobi Dx.

His revolutionary device allows point-of-care diagnostics for early detection of diseases by profiling a single droplet of blood on a smartphone. iVisco measures blood clotting time using acoustic fields and promises to be a game-changer in developing nations.

The MIAT Prize takes the form of Research & Development expertise to get the exciting product to market.

At the awards ceremony at Santander’s London headquarters, Dr Khalid said: “Winning this prize means everything to me. I’ve been working on iVisco for four years and finally amazing things are happening. Morgan’s R&D expertise will be crucial to getting it to market. Their input is worth more than money to me.” 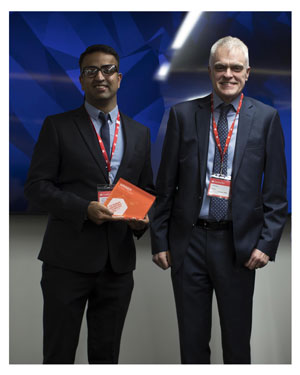 The inventor, who obtained his PhD at Glasgow University last month, was inspired by the plight of people in rural population of Pakistan, where he said everyone has a smartphone but no access to clinics.

Second prize of £10,000 of Research & Development support went to ThinAir, a biomembrane that rapidly condenses water from the atmosphere – and was inspired by a beetle. The brainchild of  students from Imperial College London, its mission is to provide a safe, sustainable water source that is accessible to everyone, everywhere.

Co-founder and CEO Jonathan Risley said: “This prize enables us to tap into Morgan IAT’s brilliant engineering expertise to help us scale up ThinAir.” The membrane was inspired by the African Fogstand beetle’s ability to condense water and mimics the structure and chemistry of it surface.

“Arslan’s resilience in bringing all these technologies together has already shown great progress and is clearly aimed at a major growth market with international appeal – many countries just do not have the clinicians, labs or refrigeration often needed with other more expensive test solutions. Point-of-care testing offers broader access to field diagnostics and healthcare, and the prospect of more immediate feedback to patients facing such difficult conditions.”

Funding for invention ideas
Six entries with real commercial potential to change people’s lives for the better were shortlisted for the MIAT Prize. Other finalists were:

Both Mobi Dx and ThinAir will receive first-class R&D expertise from a team of invention specialists to develop their ideas.

The prize was launched by Morgan Innovation & Technology (MIAT) to celebrate its 30th anniversary by offering £30,000 of R&D to an outstanding invention. The family-run company based in Petersfield, Hampshire, designs, develops and manufactures new products. It invests 20% of turnover every year into helping inventors turn their ideas into reality and is looking to collaborate with angel investors.

Further funding of £10,000 was donated by industrial design company Smallfry.

Funding for new products
MIAT CEO Nigel Clarke said: "We know from our own experiences that practical help and support can often be more valuable to an early stage inventor than cash, so we decided the prize should be made up of R&D and manufacturing services to ensure we deliver a tangible benefit to the winners.

“This has been an incredibly exciting process and we are thrilled to have such fantastic winners.”