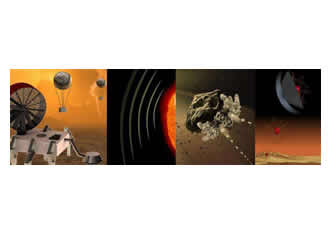 NASA has selected 13 proposals, including four from agency's Jet Propulsion Laboratory in Pasadena, California, through NASA Innovative Advanced Concepts (NIAC), a program that invests in transformative architectures through the development of pioneering technologies.

Among the selected are: a concept for reprogramming microorganisms that could use the Martian environment to recycle and print electronics; a two-dimensional spacecraft with ultra-thin subsystems that may wrap around space debris to enable de-orbiting; and a method of computational imaging that leverages extrasolar intensity fluctuations to detect "echoes" from planets and other structures orbiting a distant star.

NIAC Phase I awards are valued at approximately $100,000 for nine months, to support initial definition and analysis of their concepts. If these basic feasibility studies are successful, awardees can apply for Phase II awards, valued up to $500,000 for two additional years of concept development.

The 2016 portfolio of Phase I concepts cover a wide range of innovations selected for their potential to revolutionise future aerospace missions. Such breakthroughs hold the promise of accelerating NASA's progress toward its goals of exploration beyond low-Earth orbit, missions to an asteroid and Mars, and other priority areas in all of NASA's mission directorates. NIAC partners with forward-thinking scientists, engineers and citizen inventors from across the nation to help maintain America's leadership in air and space.

The 2016 Phase I concepts connected with JPL are:

The other Phase I concepts are: