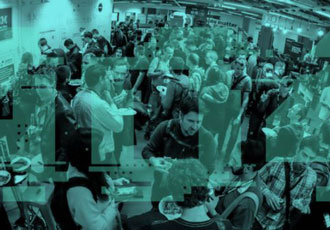 The compact Irish capital city, Dublin is the beginning of the IT migration, across the water and links with London, and has been winning awards and gaining plaudits for years. But 2018 is the year to get serious. Home to a rising number of tech giants including Google, Facebook, Linkedin, Airbnb, HubSpot, Adroll, Twitter, Amazon and eBay, Dublin ranks in the top ten cities in Europe according to the European Digital City Index, and scooped pole position for mentoring and managerial assistance and in second for entrepreneurial culture in 2016.

According to LinkedIn research, there is now a net flow of professional migration from the UK to Ireland, a fact that will only encourage the floodgates to open. The company has been analysing the relationship between the UK and Ireland labour markets twice a year since 2015, and this is the first time that has been the case.

Sharon McCooey, senior director international operations and head of Linkedin Ireland suggested that one of the reasons behind the change is the rise of Dublin as a tech hub: “Dublin has become a thriving centre of the tech industry that draws workers from all over the world, including the UK. As the nearest English speaking major city to the UK, Dublin also offers a change to travel and experience something different, while still being two hours from home - an attractive prospect for many.”

Ireland’s leading tech employers come together to recruit London’s talent
404 London will take place on Saturday 10th February, and is a major international technology jobs event to showcase Ireland as a top destination to pursue a career in tech and attract skilled tech workers to work and live in Ireland. Tickets are available for free on Eventbrite.

Companies including Workday, HubSpot, Indeed Prime, CarTrawler, McAfee, Bloomberg PolarLake, Zendesk, Bank of Ireland amongst others will promote opportunities that include vacancies in software, data, security, fintech and DevOps.

Speaking ahead of the conference, 404 co-founder Jackie Slattery said: “404 London is the first international technology recruitment event of its kind – directly connecting tech companies in Ireland with the UK’s pool of tech talent. Government and industry have rightly recognised that for Ireland’s tech sector to continue to flourish it needs a pipeline of skilled professionals. With over 365,000 developers in the Greater London area alone, the UK is a hotbed of tech activity and an obvious choice for recruitment.”

Barbara McCarthy, director of engineering at HubSpot, who will be speaking at the event, said: “At HubSpot we’re passionate about the Irish tech scene and promoting its growth in other markets, particularly London, so this event is a perfect fit for us. Our goal in sponsoring 404 London is to expand our tech network, but it’s also to learn from some engineering leaders. I love that the event covers such a wide scope of topics from front-end tech to DevOps, and we’re excited to connect with attendees and have our team learn from them throughout the day.”

The event will also present keynote speakers such as John and Brenda Romero of Romero Games, Barbara McCarthy, director of engineering at Hubspot and Bobby Healy, CTO at CarTrawler. There will also be key players from the Irish tech community and meet-up groups, so attendees can get a sense of what’s happening on the ground in Ireland.

The event is delivered by the team behind 404 Dublin and Career Zoo events, on behalf of Tech/Life Ireland, the joint initiative of Enterprise Ireland and IDA Ireland and the Department of Business, Enterprise and Innovation, and sponsored by Workday, Hubspot, CarTrawler and Indeed Prime.