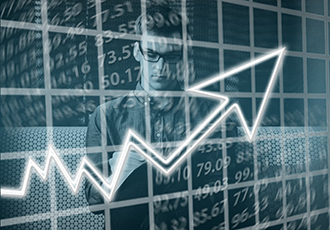 The Update also includes a detailed five-year forecast of the IC market by product type (including dollar volume, unit shipments, and average selling price) and a forecast of the major semiconductor industry capital spenders for 2019 and 2020.

The expected top-15 worldwide semiconductor (IC and O-S-D—optoelectronic, sensor, and discrete) sales ranking for 2019 is shown in Figure 1. It includes six suppliers headquartered in the US, three in Europe, two each in South Korea, Japan, and Taiwan. 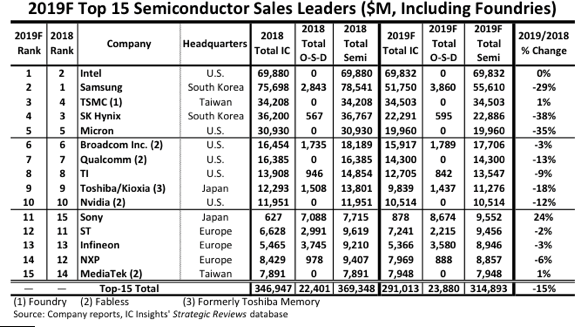 In total, the top-15 semiconductor companies’ sales are forecast to drop by 15% in 2019 compared to 2018, two points lower than the expected total worldwide semiconductor industry decline of 13%. The three largest memory suppliers, Samsung, SK Hynix, and Micron, are each forecast to register ≥29% year-over-year declines in 2018 with SK Hynix expected to log the biggest decline among the top-15 companies with a 38% plunge in sales this year. 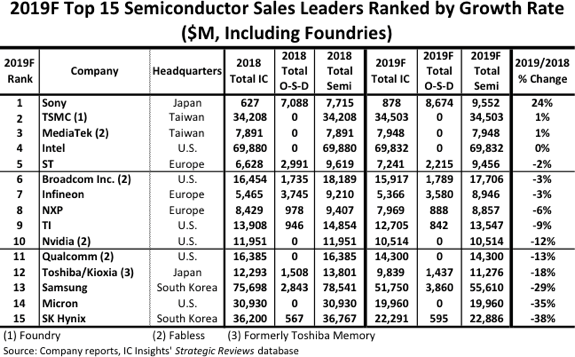 The largest move upward in the ranking is forecast to come from Sony, which is expected to move up four spots to the 11th position on the strength of extremely strong image sensor sales. In contrast, NXP is expected to fall two places to 14th with a sales decline of 6% this year.

However, with a forecasted 34% drop in the memory market this year, Intel is once again expected to rank as the largest semiconductor supplier and have sales that are 26% larger than Samsung in 2019.

The 2019 top-15 ranking includes one pure-play foundry (TSMC) and four fabless companies. If TSMC is excluded from the top-15 ranking, China-based HiSilicon (Huawei) would move into the 15th position with forecasted 2019 sales of $7.5 billion, up 24% from 2018.

Foundries and fabless companies are identified in the Figures. In the April Update to The McClean Report, marketshare rankings of IC suppliers by product type were presented and foundries were excluded from these listings.

Overall, the top-15 list is provided as a guideline to identify which companies are the leading semiconductor suppliers, whether they are IDMs, fabless companies, or foundries.