Home > Around the Industry > Entrepreneurs graduate from the CRL accelerator program
21st May 2019
Source: Mouser Electronics
Posted By : Alex Lynn 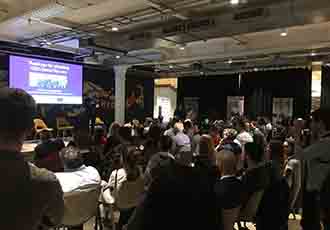 With its fifth cohort now graduating, the Central Research Laboratory (CRL) has established itself as a hive of entrepreneurial and engineering endeavour. I have attended several of its Demo Day events over the past couple of years, and have been lucky enough to meet some very impressive startups as a result.

Marcus Shepherd, CFO of U+I, the organisation responsible for instigating the CRL project, spoke prior to the company pitches getting underway. He wanted to make the point that U+I wasn't your average, purely profit-driven property developer, and was keen to draw on the history and heritage of the buildings in its portfolio, as this would bring value to the community in the surrounding area.

Based at EMI’s old vinyl pressing plant in Hayes (London), the CRL benefits from an almost unrivalled legacy when it comes to the progression of technology. Through the ingenuity of EMI engineers working at this location in bygone eras, key innovations such as stereo sound, HD TV and the CAT scanner were brought to the world.

Thanks to its partnership with Brunel University, U+I is now enabling a whole new generation to take up this mantle at the CRL. Shepherd also confirmed that a second site is currently under construction on the south coast. This is happening in collaboration with the University of Brighton.

Starting off the pitching session was Brunel product design graduate and long-term eczema sufferer Lauren Bell, with her unique solution for helping relieve the symptoms of this skin condition. Estimates suggest that close to one in five children in the UK now have to deal with the effects of eczema, with the numbers having escalated dramatically over the past few decades (pollution and food additives are likely to be factors contributing to the increase).

Many of these children find themselves in considerable pain and discomfort on a daily basis. Lauren’s Cosi Care product specifically targets the point when the itching sensation arises, which then results in children scratching and often breaking the skin (potentially leading to infections or even permanent scarring).

Employing patent pending technology, the Cosi Care toy has a Peltier cooling mechanism inside it that, once turned on, gradually reduces its temperature by 5°C and stays there for a short period to deliver a soothing effect. This is combined with a textured metal surface, which allows children to scratch using it, but without the possibility of doing any lasting harm to themselves.

The unit can deliver 15 soothing periods before it needs to be recharged. By being able to apply instant relief from irritation, this solution has clear advantages over oral medications or treatments applied to the skin – both of which take much longer to act and can also be expensive. Cosi Care offers an ongoing solution that could be used for many years. 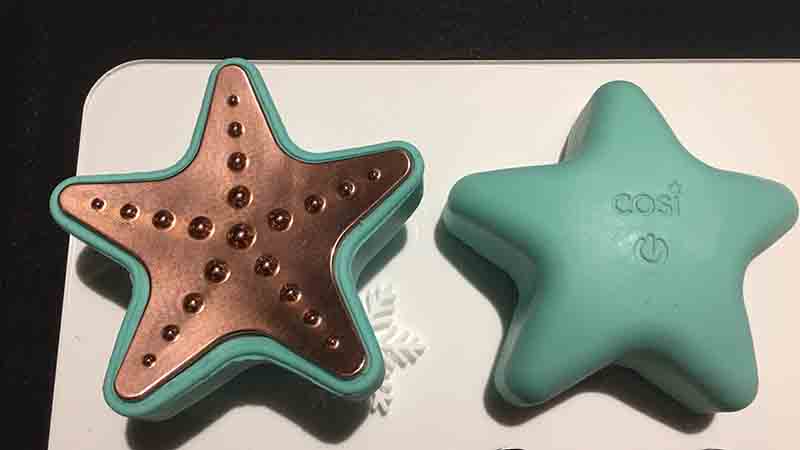 As well as the electronic version, a lower-cost model, with exactly the same structural design, is available. Instead of the Peltier cooler, there is an ice pack contained within it – which needs to be replaced every eight hours. Lauren recently won the Santander Young Entrepreneur Award. She is already developing more compact versions of Cosi Care that are better suited to the teenage and adult markets. At present she is seeking VC support to back up the grant funding already attained.

Getting adequate relaxation time is something that people are now becoming much more aware of, and the objective of the Moment Pebble is to mitigate the buildup of stress that happens to us over the course of each day by encouraging the user to take short meditative breaks. Existing mindfulness solutions tend to be app-based and require use of a cell phone.

Often, however, it is excessive use of such equipment that actually contributes to mental strain in the first place – so this is far from an ideal way to tackle the problem. Having experienced first-hand the impact that intense stress levels can have, co-inventor Alex Strang could see that enabling access to a tangible product which could be carried around would help people discipline themselves to take breaks that prevent stress reaching elevated levels and thus avoid the threat of burnout.

The Moment Pebble provides an external focus for the mind. When taken out of the pocket (or purse) and turned over to begin operation, it emanates softly illuminated patterns to initiate and guide a 30-second breathing period. Under normal circumstances its battery will run for about two weeks, before needing to be replenished. It can then be wirelessly recharged by resting it on its accompanying charging stone. A Kickstarter campaign is due to begin in late April.

Being an avid mountain biker, Dorota Grabkowska knows the dangers that extreme sports can pose. As she explained in her presentation, though at least 9 out of 10 mountain bikers wear helmets, only 2 out of 10 have back/chest protection. One of the reasons for this is that most products on the market are very bulky, making them restrictive to the rider.

Conversely, ones that are less bulky and more comfortable are simply too lightweight to actually protect the wearer properly. Drawing on her ten years’ worth of experience in advanced 3D design, Dorota’s HeroSkin body armour is being developed in collaboration with material scientists, and has previously gained backing from the Knowledge Transfer Network (KTN). Targeted at use in mountain biking, but with opportunities already recognised in skiing, martial arts and a variety of contact sport activities, it provides a fully flexible and breathable protective solution. 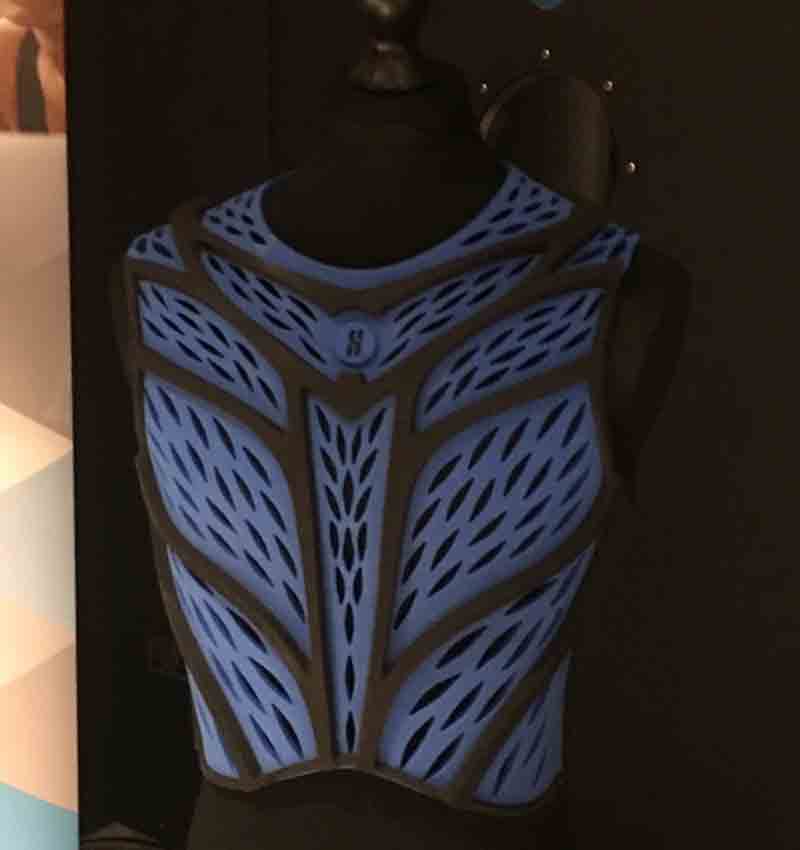 Rather than relying on large foam blocks, like conventional protective gear, the design comprises a thin foam layer with air holes (that aid movement and also allow heat to be dissipated) plus a harder polymer framework, which distributes the energy from any impact point throughout the rest of the structure – thereby lessening the chance of injury.

Founded by Alecia Esson, NxSteps is also addressing the sports market. It is looking to get hold of detailed data on the way we run/walk in order to help us avoid musculoskeletal issues in later life. The company’s streamlined pressure-sensitive insoles, when combined with relevant information acquired from other sources, can uncover gait idiosyncrasies, as well as helping with the optimisation of stride length, the reduction of landing impact and the improvement of weight distribution.

Though this is already a very crowded market, what Alecia hopes will be a key differentiator for her product is the ease with which users are able to understand the datasets compiled, and how appropriate changes can be made. Her team is currently in the process of trying to secure a £250,000 Innovate UK grant. 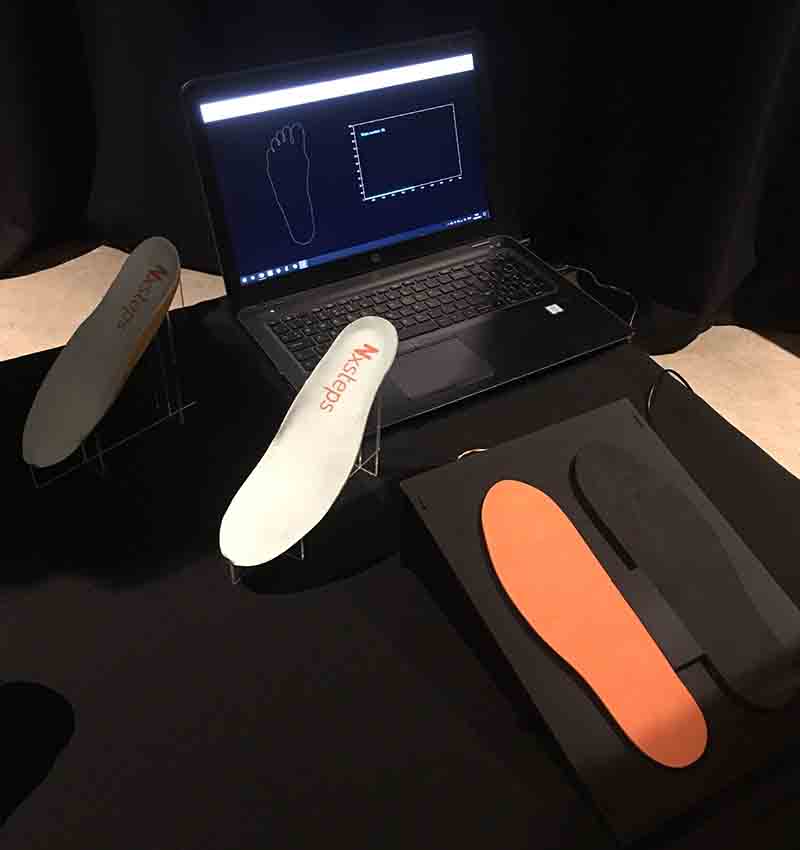 Though not there to present at the event, Stealthy is a femtech startup whose members have just recently graduated from the current CRL cohort. Founded by entrepreneur and LSE graduate Nadiya Siddique, the company is trying to address vitamin D deficiency. This is becoming increasingly commonplace, and is generally the result of bad diet and lack of exposure to sunlight. It can lead to the onset of both physical and mental health conditions. Combining style with technology, Una by Stealthy is a modular UV sensor-enabled jewelry collection intended to ensure that the vitamin D generated by the human body through regular sunlight exposure is maximised.

Admittedly a greater proportion of the startups involved on this occasion were less electronics-focused than at previous gatherings. One company, for example, was pitching adaptable high-heeled shoes that had removable/interchangeable heels, while another had a pencil sharpener and other stationery. Though both presented very strong business cases, and seemed to be commercially credible, they weren’t quite what I was looking for, given my electronics background.

Established by Connor Lascelles and Lottie Hawkins, Agile Planet is applying ground-breaking mechanical engineering to the horticultural sector. This duo have the goal of moving gardeners away from being dependent on chemical fertilisers, which leach into the water table and have carcinogenic properties.

Their Ember bio-burning kiln is a highly effective and economical means via which to turn everyday garden waste into Biochar (a carbon-negative substance that doubles plant growth and also significantly reduces the required water intake). As a modest garden would need around two bags of fertiliser annually, an Agile Planet kiln is easily able to pay for itself in less than 12 months. The company is set to start a crowdfunding campaign later this year.

The CRL panel is currently going through submissions for places on the sixth cohort, so we wait with anticipation to see what exciting new companies will be emerging next. 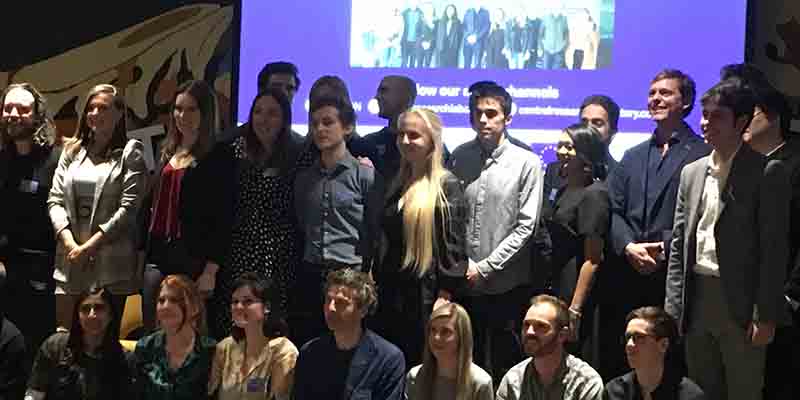