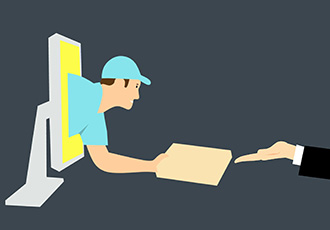 Magway, a British start-up engineering firm based in Wembley, London may be at the forefront of the next transport revolution as alternative, lower-carbon technologies for managing the enormous growth in online shopping deliveries take shape.

While the convenience of Christmas shopping has been revolutionised by the Internet, the delivery technology used to fulfil this burgeoning growth in ecommerce has remained relatively unchanged for over 100 years, relying on the internal combustion engine in vans and lorries to deliver goods to our doors.

On the run up to Christmas, roads throughout the UK are congested with competing delivery and logistics firms duplicating thousands of journeys and clocking up billions of miles in vans and articulated vehicles as they battle to ensure online shopping orders are delivered on time.

The number of these vehicles hurtling along our roads is growing. The Department for Transport reports that in the last 25 years, between 1993 and 2018, van traffic has seen the fastest growth of any motor vehicle, almost doubling to reach a record high of 51.0 billion vehicle miles (BVM). Many of these vehicles are commercial delivery vans responsible for transporting an estimated 2.5 billion parcels a year, plus around one billion online grocery orders, which include turkeys and trimmings.

Commenting on one of the major causes of air pollution, AA President Edmund King said: “The fastest growth in traffic is by vans due to internet deliveries so more technological effort should be put into decarbonising that sector as a priority.”

The true cost of Christmas

The growth in ecommerce and the convenience of online shopping is staggering and shows no sign of slowing down. The UK, has the third largest e-commerce market in the world, with only the US and China ahead. It’s estimated that 93% of UK internet users will ‘click and pay’ for online shopping by 2021, giving it the highest online shopping penetration rate in Europe. By 2021, a staggering 2.14 billion shoppers worldwide are expected to buy goods and services online, up from 1.66 billion in 2016.

Despite this bleak environmental outlook, there are signs that ‘woke’ consumerism and brand activism are starting to bite. According to recent research from Kantar, almost 80% of consumers have switched or boycotted buying products in the last year, or are thinking of doing so, due to a brand’s environmental credentials and reputation. Almost 90% of shoppers agree that brands need to take more responsibility for the waste they produce and the impact it has on our environment.

Air pollution, excessive packaging and overuse of plastic are some of the concerns consumers now think about when it comes to making purchasing decisions and evaluating how retail brands operate.

Managing Director Anna Daroy of Magway, said: “Not enough is being done to address the future of our transport infrastructure. Without a significant step change in managing how billions of parcels and goods reach our doors, delivery traffic will continue to increase along with the levels of toxic air we breathe.”

According to DEFRA’s Clean Air Strategy 2019: “Transport is a significant source of emissions of air pollution. Exposure to the pollution still present in our atmosphere is one the UK’s biggest public health challenges, shortening lifespans and damaging quality of life for many people. Better, cleaner technologies and simple changes in behaviour will tackle the pollution that claims lives.”

In just a few years, companies such as Magway will allow retailers to offer a more environmentally friendly way of delivering their online orders, creating a ‘greener’ Christmas, rather than a white one. The British start-up has developed the technology required for a ground-breaking, lower-carbon alternative for transporting e-commerce deliveries via an underground network of pipes.

Following several successful funding rounds which have helped raise almost £1.5 million, including a current Crowdfunding campaign, Magway will initially provide short delivery routes for airports such as Heathrow, helping to alleviate freight traffic. Construction of a wider UK network of pipes, spanning hundreds of kilometres is expected to start in 2023.

Members of the public can participate in the campaign with an investment from as little as £10 with various rewards available, including their very own Magway model. Over 50% of the £750,000 target has already been raised, with younger generations of 18 to 30-year-olds representing the largest group of investors.

Caring for the environment is at the forefront of many consumers’ minds at the moment. For shoppers looking for a greener alternative Christmas present this year that will help improve air quality by removing traffic from our roads, while potentially offering a favourable return on investment, then investing in a cleantech company such as Magway may well be worth considering, if it’s a greener Christmas shoppers are dreaming for. 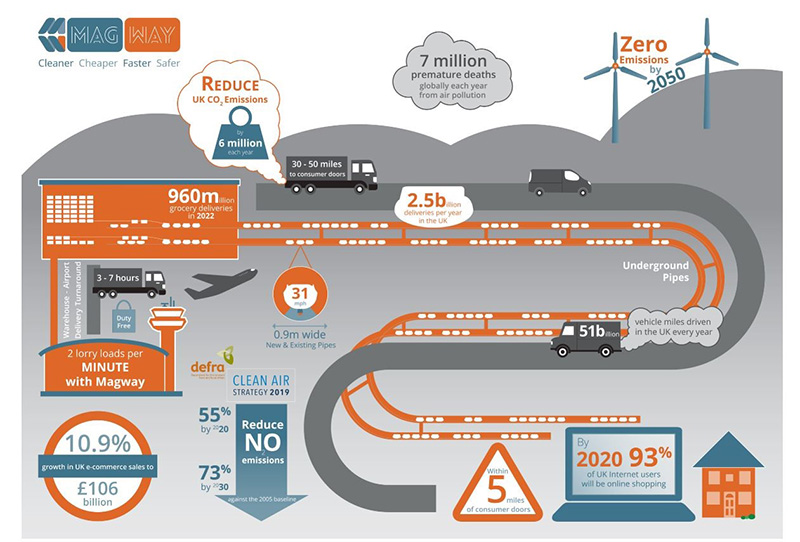