Challenging times ahead for the electronics industry

Home > Around the Industry > Challenging times ahead for the electronics industry
16th May 2018
Source: ECSN; AFDEC, IDEA
Posted By : Lanna Cooper 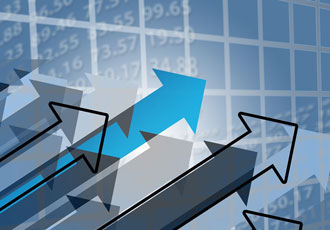 Members of the professional community the Electronic Components Supply Network (ecsn) collaborate each year to produce an accurate annual forecast for the UK electronic components market. They predicted that 2018 was 'likely to be another challenging year' and with extended manufacturer lead times, strong growth in new applications, more mergers and acquisitions, a potential trade war and the dreaded 'A' and 'B' words it seems they called it correctly.

In this update the association’s Chairman, Adam Fletcher, provides an insight into the issues our industry is currently facing and examines the possible implications.

Returns from ecsn member confirm that the UK and Ireland electronic components market is currently enjoying the longest period of sustained growth since 2000. See the graphic 'ecsn / afdec -UK DTAM Growth 2013 to 2018'.

They predicted that the market would continue to progress in Q1’18 and grow in the range 10-12% compared to the same period last year. (The green and orange bars in the graphic indicate the forecast range).

In the event UK and Ireland electronic components markets did make a strong start to the year but the ten percent growth over the same period ‘17 was at the lower end of ecsn’s guidance, indicating a slight slowing of the UK manufacturing sector and reflecting the latest data from the Office for National Statistics and the Markit/PMI UK Manufacturing Survey.

It seems however that the wider global components markets are marching on, although fully audited figures have yet to be released. Combined with limited production capacity this strong global growth will inevitably extend availability of most electronic components, probably out to a ‘new-normal’ lead-time of 8-10 weeks. 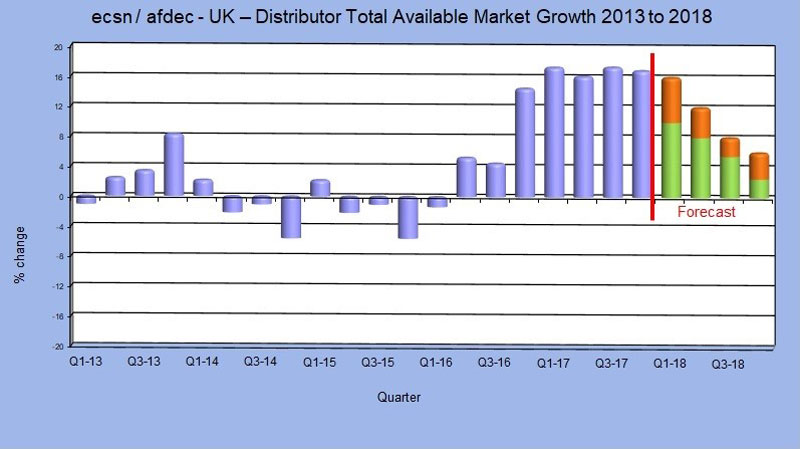 5G networks build out and mobile super cycle
A major driver of global electronic components industry growth for the back end of this year and on into the next is certain to be related to the deployment and availability of fifth generation (5G) networks. A plethora of next-gen 5G applications are already being developed, including autonomous vehicles, smart factories, smart city sensors and systems for the backhauling of aggregated data.

The promise of 'significantly improved performance' is expected to drive up to 24 million 5G SIM phone connections and two million 5G SIM machine connections in the UK by 2022, together generating a revenue of £2.8bn. But early adopters of a 5G phone might be disappointed amid fears that inadequate battery capacity will restrict the first few generations to 4G networks and only allow 5G operation for frustratingly short bursts.

US/China - escalating trade dispute...
The US Trade Representative has determined that the acts, policies and practices of the Government of China related to the transfer of intellectual property and innovation are 'unreasonable or discriminatory and burden or restrict US commerce'. The US government is proposing to redress this imbalance by imposing a 25% tariff (import duty) on a wide range of items imported into its country.

The media has been quick to examine the ramifications of the levy on US imports of Chinese steel and aluminium and has largely overlooked the fact that the USTR order also encompasses many Chinese manufactured commodity electronic components, including lithium batteries, relays, capacitors, resistors, connectors, and LEDs.

The global electronic components supply network has to hope that a negotiated settlement with China will soon be reached because an escalating trade dispute will have a massive negative effect. And if a Trade Dispute wasn’t worrying enough, the US has also imposed a seven-year ban on the export of US technology to ZTE, China’s second largest telecom equipment maker, which it accuses of infringing the international embargo on technology sales to Iran and North Korea.

The ban is likely force ZTE into bankruptcy but in the process will also damage the sales revenues of the many US technology companies that have been happily exporting components and software IP to ZTE for years.

The 'A' word
The electronic components supply network today manages over 1,000,000 SKUs (Stock Keeping Units), but manufacturers of only approximately 100 A-class inventory items (‘high runners’ in terms of value multiplied by volume shipped), and approximately 500 B- and C-class (commodity) inventory items are today quoting greatly extended lead-times of 26+ weeks.

Approximately 600 in 1m is a very small percentage of components on extended lead time, but without these parts PCBs cannot be assembled.

It’s understandable therefore that industry Buyers often perceive any electronic component with a quoted manufacturer lead-time of 26+ weeks as being on 'allocation' prompting them to double- or even triple-order, placing orders on more than one supplier and subsequently cancelling the orders on the remaining suppliers once a delivery has been made, a practice that causes havoc throughout the supply network.

And it’s not necessary as so far this year component manufacturers and their authorised distributors have been able to juggle available inventory to meet their customers’ needs.

The growth is unlikely to be linear, and we won’t be able to avoid the odd pothole along the route ahead of us. In the short term price rises in the passive components markets seem inevitable while limited manufacturing capacity and the impact of M&A activities in the market will probably keep a small number of electronic components around 26+ weeks, while availability of the majority will hover around the 8-10 weeks mark for the foreseeable future.

On the plus side the price of commodity memory looks set to decline as additional manufacturing capacity comes on-line.

The proposed imposition of tariffs on US imports and exports together with uncertainties over Brexit (the B word) here in the UK are just injecting a further level of uncertainty into the market but Fletcher remains confident that the electronic components supply network will be able to adapt to whatever outcomes eventually emerge.

In the meantime, Fletcher encourages all organisation to actively engage with their partners throughout the electronic components supply network. Only by ensuring good communication both up and down their network and by reacting diligently to the signals sent and received will supply equilibrium be maintained across our industry.